Nerve-wracking gold for Malik, no glittering end for Tee Kui

DECATHLETE Mohd Malik Tobias brought the Malaysian campaign in athletics to a victorious end by clinching a nerve-wracking eighth gold medal for Malaysia at the My Dinh National Stadium in Hanoi last night.

He headed the field by more than 300 points going into the final event, the 1,500m. But Malik made life difficult for himself by coming in last in the run.

He was tops in six of the 10 events - the long jump, shot putt, high jump, 110m hurdles, discus and pole vault. He also finished commendably in the 110m, 400m and javelin, only to almost throw it all away with an extremely poor performance in the 1,500m.

It took several minutes before Malik was declared the winner and the first thing the Malaysian did was to pay tribute to the Indonesian competitor, Paulinus Mahuse.

“The 1,500m had always been my Achilles heel but I knew that the gold would be mine if I could finish the run under six minutes,” said Malik.

“I am indebted to the Indonesian runner (Paulinus), who allowed me to follow him. He paced the race well to ensure I finished under six minutes.”

Malik chalked up 6,668 points against 6,542 for Van Ha. Defending champion Gallenero Fidel of the Philippines was placed third with 6,381 points. Paulinus finished sixth in the nine-competitor event with 5,777 points.

The 39-year-old police inspector took bronze in the 1989 Games in KL Games.

“I gave my best today but it was not good enough. I cannot say that I will improve by training harder anymore as age has caught up with me.” 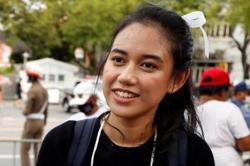