ROME: European champions AC Milan joined Juventus at the top of Italy’s Serie A after defeating neighbours Inter Milan 3-1 in a pulsating derby at the San Siro on Sunday.

Fillipo Inzaghi gave Milan the lead before second-half goals from Kaka and Andriy Shevchenko piled the misery on Inter, desperate to avenge their Champions League semi-final defeat to their local rivals last season.

Inter’s Nigerian teenager Obafemi Martins reduced the deficit, but the “home” side spurned several late chances to close the gap further and make for an exciting finale.

Milan’s victory took them level on 13 points with Juventus, who earlier on Sunday edged Bologna thanks to a controversial penalty converted by David Trezeguet.

Inter’s first defeat of the season saw them drop to sixth.

Shevchenko, whose goal was his 11th in 30 derby matches, was delighted to play his part in Inter’s downfall.

“The Milan derby is a grand occasion, the most important game of the championship, so it always gives you a special feeling to score in these matches,” said the Ukrainian.

The game sprung to life in the 40th minute when Milan took a deserved lead.

Cristiano Zanetti fouled Kaka on the edge of the box to concede a free-kick which Andrea Pirlo curled towards the far corner of the net.

Inzaghi, who broke away from the defensive wall, was standing in the way of the shot, but with a swift turn of his head directed the ball wide of wrong-footed Inter goalkeeper Francesco Toldo and into the net.

Milan turned the screw a minute after half-time. Shevchenko found space wide on the right and fed Gennaro Gattuso, whose left-wing cross was headed in by Kaka for his first goal for the Champions League holders.

Inter fell further behind in the 67th minute when Shevchenko played a neat one-two with Cafu before rifling the ball into the net off Toldo’s legs for his sixth goal of the season.

Martins responded with a stunning drive which found the top corner two minutes later, but Inter’s recovery came too late and Milan stood firm for their fourth league victory.

Milan coach Carlo Ancelotti was full of praise for his players.

“The team did really well today, it was a great game for us and we are very happy,” he said.

“I thought it would be a tight balanced game like last season but we were able to get hold of the game in midfield and also to take our chances. Our aim is to be in that sort of form all the time,” added the Milan coach.

Trezeguet’s spot-kick 10 minutes from time gave Juventus a scrappy 2-1 win which was overshadowed by Gianluca Zambrotta’s admission that he conned the referee to earn the penalty.

With the scores level and Bologna continuing to frustrate the home side, Zambrotta went charging into the box and fell under the innocuous challenge of Cristian Zaccardo and referee Gianluca Paparesta pointed to the spot.

Zambrotta admitted after the match that he had made tackle seem worse than it was in order to win the penalty.

“I exaggerated my fall a little and Paparesta could have even booked me for acting,” he told RAI’s Stadio Sprint.

Juventus coach Marcello Lippi was unaware of his player’s comments and refused to talk about the incident.

“I’m not interested in what Zambrotta said, I don’t talk about penalties given or conceded,” he said.

Roma lost ground on their title rivals and dropped to joint second after being held to a goalless draw at Siena.

But the visitors could have come away with a precious win had Marco Delevecchio’s fifth minute strike not been ruled out for using his hand to control Francesco Totti's defence-splitting pass.

Lazio ended their poor run by defeating Chievo 1-0 at the Olympic Stadium where Sinisa Mihajlovic’s deflected free-kick decided a tight contest in the capital.

Adriano’s sixth goal of the season gave Parma a 1-0 win at home to Sampdoria and moved them level on 11 points with Roma, while Brescia’s Andrea Caracciolo scored a hat-trick in the 4-1 demolition of Lecce. – Agencies 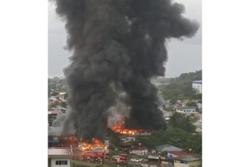