PETALING JAYA: Malaysia's world rally champion Karamjit Singh and his long-time partner and co-driver Allen Oh have been honoured with a place in the Malaysia Book of Records as the most successful rally duo in Malaysian history.

Both Karamjit and Allen, two-time overall Asia Pacific Rally Championship (APRC) winners and four-time Group N APRC champions, will be presented with their awards at the Selangor Night Of Achievers in Shah Alam today.

The event, jointly organised by the Malaysia Book Of Records and the Selangor Government, is held to pay tribute to individuals who have excelled in their respective fields.

“This is indeed a fantastic way of paying tribute to the achievements of both individuals and the Petronas EON Racing Team, especially since this is also the first time our accomplishments are being recognised by the state,” said PERT team manager Datuk Abdul Razak Dawood.

“Without intending to sound arrogant, Karamjit, Oh and PERT's achievements to date will certainly be difficult for any Malaysian to outdo for a very long time.”

Abdul Razak hoped that PERT's accomplishments would inspire other Malaysians to follow suit.

“At the moment, there is a big and alarming gap in the standard of driving and competition between Karamjit and the next level of aspiring Malaysian rally champions. This is an area that needs to be given serious consideration if we are to continue producing world rally champions,” he said.

“Many of our local drivers are talented but it would be meaningless if they are not given the opportunity to compete and gain experience in events outside of Malaysia.”

Karamjit made a bright start to the defence of his world title when he finished third in the Rally of Sweden earlier this month. He was later promoted to second place after the champion was disqualified due to a technical infringement on the vehicle and now has a total of eight points. 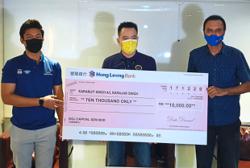