On a sunny afternoon in the Mediterranean principality, Perez's best lap of one minute 12.476 seconds was 0.041 quicker than Leclerc, with Sainz 0.370 off the pace.

Verstappen leads Leclerc by six points after six races, with the Ferrari driver seeking to become the first Monegasque to score points at home since Louis Chiron finished third in 1950.

AlphaTauri's Pierre Gasly was fifth and Lando Norris, recovering from tonsillitis, sixth for McLaren despite clipping the wall.

Aston Martin's Lance Stroll hit the wall after bouncing off a kerb. 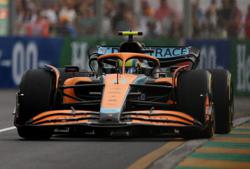