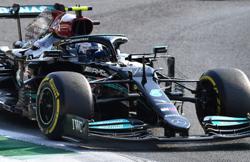 (Reuters) - McLaren's Lando Norris said he had been unfairly punished and stewards should have a rethink after being handed a grid penalty at the Azerbaijan Grand Prix on Saturday.

The 21-year-old was handed a three place drop and three penalty points for failing to enter the pits immediately on qualifying being halted in Baku.

The Briton, who qualified sixth but starts ninth on Sunday, was speeding down the straight and had almost reached the pitlane entrance when red flags came out.

He asked the team for guidance and then continued, completing a further lap.

Norris told reporters he had taken the safer course of action, had not put anyone in harm's way and had gained nothing.

"They (the stewards) should think what it's like to be in the driver's seat, for a second," he said. "What they have to react to at the speed they're doing and the time you have to react to things.

"I think a reprimand or something is the right thing to do."

He said stewards should "have a bit of a rethink on what's actually really fair for the driver.

"I don't deserve three points on my licence for this. I didn't do anything dangerous," he said.

"I know what the rules are so it's not like I have a lack of understanding. It shouldn't ruin my race while having to make this kind of a decision... in my opinion it's a bad decision, or just an unfair penalty, an unfair ruling."

The stewards, who included Brazil's former F1 racer Enrique Bernoldi, said they had given a three-place drop rather than five due to the limited amount of time Norris had to make a decision.

"We clearly disagree, receiving a penalty like this, ruining our race for what actually happened. I don't know why the stewards have no room to do a different penalty there if they think they have to give a penalty," he said.

"If you look at what actually happened, Lando had probably a second to decide in the high-speed section of the track. In the end he decided to go for a safe action where he didn't put anyone at risk."