Hafizh settles for the smell of burning rubber and not delicacies Set for a busy weekend: Hafizh Syahrin posing with his bike before the start of the French Grand Prix in Le Mans.

PETALING JAYA: Most Malaysians will be at home celebrating Hari Raya this weekend but motorcycle rider Hafizh Syahrin Abdullah is burning rubber at the Le Mans track in France.

The 27-year-old is in Europe to get ready for the fifth round of the Moto2 world championship, which started with the free practice sessions yesterday.

Hafizh has long accepted the fact that his commitment to his chosen career takes priority above everything else.

“It’s not the first time I have spent Hari Raya over a racing weekend overseas.

“The best time spending Hari Raya is always back in Malaysia with your family as you get to enjoy the different delicacies.

“But I have racing commitments to finish, ” said Hafizh, who is hopeful of making further improvements astride his Japanese NTS bike at the French track this weekend.

Hafizh is riding for RW Racing team this year. The Dutch-based team are relatively new to Moto2, having only joined the intermediate class in 2017. They are working on developing their NTS chassis.

He chalked up his best finish of the season after coming in 17th in the Spanish Grand Prix two weeks ago. 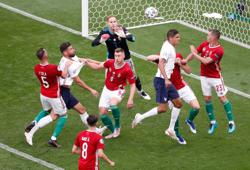