(Reuters) - Team by team analysis of Sunday's Emilia Romagna Grand Prix at Italy's Imola circuit, round two of the Formula One season (listed in championship order):

Hamilton started from pole for the 99th time but lost out to Verstappen through the opening corners. He skidded off, dropped to ninth and a lap down but the race stoppage brought him back into contention. The fastest lap kept him top of the standings, a point clear of Verstappen. Bottas started eighth and crashed out after a collision with Russell that halted the race.

Verstappen made a great start, making contact with Hamilton through the opening corner and had the race generally under control. The win was the 11th of his career and first time on the podium in Italy. Perez started on the front row for the first time but dropped to fourth on the opening lap and then picked up a 10 second time penalty for overtaking when the safety car was deployed. After the restart another mistake dropped him from fourth to 14th.

Norris collected the second podium of his career, after starting seventh, and only McLaren's fourth in seven years. His podium was the 700th by a British driver. He re-started the race on the soft tyre which allowed him to overtake Leclerc. Ricciardo struggled with the tyres and allowed Norris through.

A strong showing for Ferrari at their home track, but Leclerc could have been on the podium. The Monegasque was second when the race was suspended, and 25 seconds clear of Norris, but he then lost out to the McLaren driver and Hamilton. Sainz started 11th, made some mistakes on the wet surface but came through strongly as the track dried.

Gasly started fifth and finished eighth but moved up a place after Stroll was demoted. Japanese rookie Tsunoda started at the back of the grid after his crash in qualifying. He made up places but spun after the re-start in his first wet F1 race and also collected a five second penalty for exceeding track limits.

Stroll collected a five second time penalty for going off track while passing Gasly. Vettel started in the pit lane after his brakes overheated before the start and was handed a 10 second penalty for the car not being ready in time.

Ocon scored Renault-owned Alpine's first points under the team's new name. Alonso opened his account in his comeback season after two years out. Ocon started on full wet tyres after a sudden pre-race downpour. Alonso was on intermediates but required a front wing change before the start after running wide and hitting the wall on his way to the grid.

Raikkonen had finished ninth but was handed a 30 second post-race penalty for a rolling start infringement. Giovinazzi suffered a late brake problem that required a pitstop, dropping him out of the points.

Russell crashed out while trying to pass Bottas for ninth place. Williams looked much more competitive with both drivers going through to the second stage of qualifying. Latifi crashed out on the opening lap after contact with Mazepin.

Schumacher spun into the wall on the main straight during the safety car period in his first wet F21 race, forcing the pit lane to close as debris was scattered at the exit. That prevented the German pitting immediately for a new front wing. 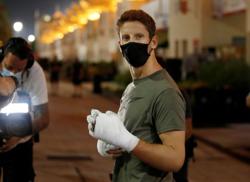