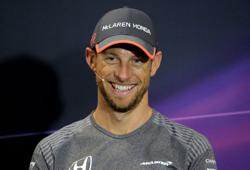 LONDON (Reuters) - Williams will take years to fight back from rock bottom in Formula One but there is a new sense of optimism, according to the team's former driver and newly-appointed senior advisor Jenson Button.

The once-dominant former champions have been last for the past two seasons, failing to score at all last year. They have taken one point from their last 45 races and not won anything since 2012.

The founding family sold up last August, with U.S.-based Dorilton capital taking over and breaking with the past by buying in gearboxes and hydraulics from engine partners Mercedes.

"I think with the new owners, they’re not afraid to think outside the box and try new things," said Button, the 2009 world champion with Brawn GP. "That’s exactly what Williams needs.

"I understand it’s been a family business for so long and they’ve wanted to produce everything themselves but sometimes you can’t.

"You need to outsource on certain things and outsourcing with a company like Mercedes has to be a good thing if you look at what they’ve achieved in the last eight years in Formula One."

Mercedes, the team of seven times world champion Lewis Hamilton, have won every title since 2014 with the same engine as Williams.

"I think they (Williams) are going about it in the right way and it just takes time. It’s not going to be an overnight change for Williams, it’s going to take a few years, but they’re on the right path," said Button.

"I think a lot of it is the atmosphere within the team needs to change because I think everyone’s very down because it’s been the last two years that they’ve struggled. But there really is a new sense of optimism."

Button, who made his F1 debut with Williams in 2000 and was once the youngest driver to score a point, said his new multi-year role could see him drive some of the team's historic cars but not the current one.

"That’s not my job to drive the car and tell the drivers how to drive. It’s spending time with the drivers and understanding what the issues are, whether it’s the car or the feeling that they have within the team," he said.

"Being hands on with that, that’s going to be a big part of my job I think."

Button, who also works as a paddock pundit for Sky television, said he would attend quite a few races and be in a position to watch Williams from the outside as well as inside.

Communication was something every team needed to work on, making everyone feel included, and none of those he had worked for had got it exactly right.

"When you’re within a team and you’re head down, focused on the weekend, you can miss things. Being kind of from the outside and looking in, you can see things that need improving and that’s also where I’m going to be working very hard." he said.