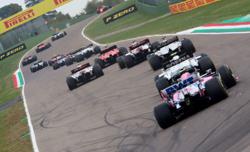 (Reuters) - Team by team analysis of Sunday's Emilia Romagna Formula One Grand Prix, round 13 of the 2020 season (listed in current championship order):

Mercedes have now won the constructors' and drivers' titles for a record seventh year in a row. The title is solely between Hamilton and Bottas, with the Briton extending his lead to 85 points after setting the fastest lap. It was his ninth win of the season and record-extending career 93rd. Bottas started on pole but collected debris on lap two and struggled with floor damage. Hamilton was third after the first lap but a virtual safety car period fell into his lap after Bottas and Verstappen had pitted. The one-two was a 58th for Mercedes in Formula One and the victory a 100th for Toto Wolff as team principal.

Verstappen was in second place, having passed Bottas, when he suffered a rear tyre failure, possibly due to debris. It was his third retirement in three races in Italy this season. Albon started sixth but finished last after spinning at the second chicane at the re-start after the safety car brought out by Verstappen's crash.

Ricciardo's second podium in three races, after starting fifth on the grid, lifted Renault from fifth to third. The Australian held on with older tyres against Kvyat. Ocon retired on lap 28 with a suspected transmission problem.

McLaren are a point behind Renault and level with Racing Point but ahead on placings. Sainz moved up three places from his start position, narrowly missing Albon when the Thai spun in front of him. Norris gained a place on his grid position.

Perez was in third place when he pitted 12 laps from the end. He would have been better served staying out on the hard tyre and defending position at a track where overtaking is tricky. Stroll made contact with Ocon on the opening lap, damaging his front wing. He overshot the pit box on his final stop due to cold brakes, knocking a mechanic over.

Vettel made contact with Magnussen at the start and lost a place. He would still have finished in the top 10 but for a slow pitstop that took more than 13 seconds due to a stripped wheelnut.

Gasly started fourth for his team's home race but was the first retirement, no surprise after the team detected a drop of water pressure on the way to the grid. Kvyat, his position under threat, responded well from eighth on the grid.

The team's first double points finish of the year, after they extended both drivers' contracts for 2021. They started 18th and 20th on the grid respectively. Raikkonen did a 48 lap opening stint on the medium tyres before switching to soft. Giovinazzi did 53 laps on the hards to the chequered flag after starting on mediums.

Magnussen spun after contact with Vettel on the opening lap and retired on lap 48 with a gearbox problem. Grosjean finished 12th but dropped two places due to a five second penalty for exceeding track limits.

Russell, who qualified 13th, could have scored his first points in Formula One but speared into the tyre barrier while warming his tyres behind the safety car and in 10th place.

Volkswagen considering entry to more sustainable F1 - BBC
Vettel says F1 sprint races make no sense
Aston Martin expect to get the best out of Vettel
Aston Martin bring in James Bond as new F1 mission begins
He will step up a gear
Alonso 'completely fit' and fine for testing, says Alpine CEO
Bottas hopes to fight for F1 title with a 'happy head'
Eighth title bid will not decide my future, says Hamilton
Alonso does not look or drive like a 39-year-old, says Ocon
Hamilton makes diversity a priority as Mercedes show off his new car