In need of a push: Hafizuddin Othman has struggled to match the standard of former goal keeper S. Kumar when the stakes were high.

PETALING JAYA: It’s always an honour to be the Speedy Tigers’ first-choice goalkeeper and S. Kumar had played that role admirably in the final 10 years of his career that started in 1999.

Finishing with 323 international caps, Kumar has been the mainstay in almost all the major international events and his retirement in 2019 left a huge burden on his deputy Hafizuddin Othman.

With Kumar having raised the bar high, it was obvious that Hafizuddin has struggled when the stakes were high, especially at the Asia Cup campaign in Jakarta two months ago where the Tigers finished runner-up, with second choice Adrian Andy Albert hardly used due to inexperience.

Adrian has nine caps to his name while third-choice Zaimi Mat Deris has started once and came in as a substitute in another game during the 2019 Azlan Shah Cup tournament.

Kumar, now the national goalkeeping coach, wants Adrian and Zaimi to bridge the gap between them and Hafizuddin so that the Tigers will have three quality keepers as the national team reach the crucial stage of their preparation towards the World Cup in Bhubaneswar, India, from Jan 13-29.

Having returned from a two-week training camp at the Drijver Goalie Academy in Amsterdam, Kumar said he would be using some of the knowledge gained there to achieve his goal.

“Hafizuddin is the current number one but we need strong back-up. My objective is ensure the Tigers have three goalkeepers with the same ability as we prepare for the World Cup,” said Kumar.

“Hafizuddin is currently better than Adrian and Zaimi but I want them to work hard and improve.

“The training camp in Amsterdam was very useful and there were a lot of new drills that I will be introducing during training and help our three keepers to improve further.

“If Adrian and Zaimi show progress, this will also push Hafizuddin to work harder to remain as the No 1. I have told him (Hafizuddin) that he cannot take things for granted.

“By having three strong goalkeepers, the team will not be left in the lurch in case Hafizuddin is not available for a match.”

Kumar was happy with the progress shown by the trio during the strength conditioning training under fitness coach Tom Drowly and is hopeful they will adopt the same attitude during skills and tactical training and also during next month’s four nations tournament in Spain.

Malaysia will be playing four matches against Spain and two against France. They are also expected to play Olympic Games champions Belgium during the Tigers’ Europe tour next month.

“All three players will get to play in those matches. That’s the only way Adrian and Zaimi can get the experience while Hafizuddin will continue getting high quality matches against the top nations,” added Kumar.

Kumar and another former international Roslan Jamaluddin, who is the national junior coach, attended the Drijver Goalie Academy to further improve their skills as goalkeeping coaches. 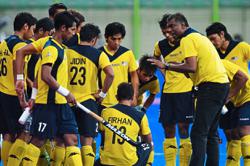