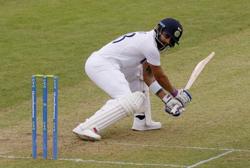 On the double: Defender Razie Rahim closes in on a South Korean player in an Asia Cup clash in Jakarta yesterday. — MHC

PETALING JAYA: A third quarter wobble almost spoiled a brilliant day for the Speedy Tigers who hung on valiantly to edge South Korea 5-4 to seal a super four spot in the Asia Cup.

Leading 4-1 in the third quarter in Jakarta yesterday, the Malaysians lost their focus and possession to allow the four-time champions to stage a fightback and reduce the deficit to 4-3 before a late penalty corner goal from Razie Rahim (52nd minute) gave the Tigers a breather at 5-3.

The South Koreans struck again in the 56th minute through a field goal from Yang Ji-hun which forced Malaysia to hang on for dear life to secure their second straight win in Group B.

Faiz Helmi Jali had remained on the field after receiving a yellow and this forced match referee to flash captain Marhan Jalil a yellow card in the dying minutes of the fourth quarter but Malaysia survived the drama to secure a hard-earned victory.

It was also their first win over South Korea since beating them 4-2 in the Asian Champions Trophy in Muscat, Oman in 2018.

National coach A. Arulselvaraj while praising his players’ ability to hang on despite playing with nine players with less than two minutes of play added that the 11 penalty corners conceded was a real concern.

“It’s a good win for us but not good enough to achieve our goal here. We let the opponents come back at us when we were leading 4-1 but the players defended well and it was a good attitude.

“However, instead of allowing opponents to come into our circle, we must play to win,” said Arulselvaraj.

“We have to credit our defenders, especially Marhan who defended so well during penalty corners and as a leader, he went all out to stop them from scoring.

“We wanted Razie to continue scoring from penalty corners and he converted two and we hope he continues doing that.”

Malaysia will take on Bangladesh in their last group match tomorrow.