Make way: Malaysia captain Marhan Jalil (left) trying to get past an Oman player in their Asia Cup match in Jakarta yesterday.

PETALING JAYA: The Malaysian Tigers, powered by a Razie Abdul Rahim hattrick, got off to a rousing start in the Asia Cup when they hammered Oman 7-0 in Jakarta.

Playing in their first tournament after three years, Malaysia settled in quickly through Razie’s penalty corner conversion in the sixth and 13th minutes. The defender then found his third goal through a penalty stroke in the 19th minute of their Group B match yesterday.

Coach A. Arulselvaraj was happy that his players had found their goalscoring touch, an area that was under scrutiny after Malaysia’s friendly series in Australia last month where they fired blanks.

“It was mentally and emotionally tough to play a major event after three years but it was a good start for us,” said Arulselvaraj.

“If possible, we wanted to finish off the game in the first half where we were 4-0 up. It made it easier as we didn’t want to struggle all the way.

“We wanted Razie to score through penalty corners. We had five and he converted two.

“Penalty corners, penalty stroke and it was also nice to see them score from field goals.

“We had five different scorers today and this shows that we can score goals.

“The major difference in the team is the unity among the players and the teamwork they have been showing but it has to be consistent.”

Group rivals South Korea served a warning ahead of their match against Malaysia today when they thrashed Bangladesh 6-1 in their opener.

“South Korea have good coaching line-up and players who can score goals.

“We have done a lot of work to prepare against them.

“Tomorrow is another game, today is history,” added Arulselvaraj.

Malaysia will secure a spot in the super four if they upstage the Koreans. 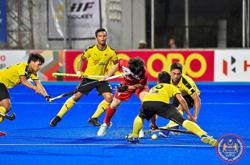