S. Africa can turn up the heat on Malaysia after Chile rout

Killer instinct: South African players celebrating after scoring the first goal against Chile in the Group A match in India. — FIH

PETALING JAYA: South Africa sounded a warning to Malaysia when they hammered Chile 5-1 to notch their first win in Group A in the Junior Hockey World Cup in Bhubaneswar, India.

Idrees Abdulla and Peter Jarvis gave the South Africans a comfortable lead in the seventh and 36th minutes before Chile pulled one back through a penalty corner from Agustin Amoroso in the 38th minute.

Cameron Forestier, however, restored the advantage for South Africa through a field goal in the 42nd minute and three minutes later, Jacques van Tonder completed the action-packed third quarter with a penalty corner conversion.

Forestier flicked in his second goal in the 59th minute to wrap up their commanding rout over the South American champions.

They will play Malaysia today in their final Group A fixture to decide who will join Belgium in the quarter-finals.

Chile are destined for the classification rounds as yesterday’s defeat was their second after losing 1-2 to Malaysia on Wednesday.

“It feels good to get our first win and we managed to apply what we’ve been practising in training,” said Forestier, who won the man-of-the-match award.

“Now we look forward to playing Malaysia and we hope to come out on top again.”

France continued their sparkling form by beating Poland 7-1 to put them firmly on top in Group B. It is their second straight win after beating hosts India on Wednesday.

Defending champions India bounced back by trouncing Canada 13-1 for their first win in Group B. 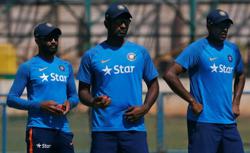