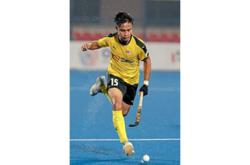 Having a blast: Striker Amirul Haniff Mamat making an attempt at goal during the Group A match against Chile. — International Hockey Federation

PETALING JAYA: Malaysia were in red-hot form as they executed two brilliant set-pieces to douse Chile in the Junior Hockey World Cup.

Wallace Tan’s boys got off to a splendid start after beating the Junior Pan American champions 2-1 in their Group A encounter at the Kalinga Stadium in Bhuba-neswar, India, yesterday.

The goals were scored by Kamarulzaman Kamaruddin (34th) and Syarman Mat Tee (43rd) who were beneficiaries of two well executed penalty corners.

In the first quarter, Malaysia started well with midfielder Pavandip Singh creating lots of chances and even getting a penalty corner as early as the fourth minute.

But despite all their possession and chances, they could not find a way past Chile goalkeeper Pedro Hernandez.

It was an even affair in the second quarter and Chile had numerous chances to score but their attempts were also well thwarted by goalkeeper Che Sharul Azmi Che Saupi.

After a half-time pep talk, Malaysia pressed hard in the third quarter and were rewarded when midfielder Kamarulzaman unleashed an unstoppable shot off a penalty corner set-piece created by captain and striker Akhimullah Anuar Esook in the 34th minute.

The goal gave the Malaysians the confidence and they kept the game tight and prevented Chile from making good attempts in the circle.

The second goal came in the 43rd minute and it was another fine set-piece penalty corner where three players dummied off Akhimullah’s pass for defender Syarman to finish off with a smart flick.

Chile, however, got one in the fourth quarter when Sebastian Wolansky scored off a penalty corner in the 59th minute but it was too little too late.

In another Group A match, 2016 runners-up Belgium got off to a blistering start by thrashing South Africa 5-1. 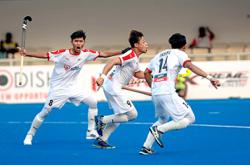