PETALING JAYA: Malaysia have their captain Marhan Jalil to thank after they held France 1-1 before prevailing 3-2 in the shootout in a friendly at the Wales Hockey Centre.

Marhan scored the equaliser in the 56th minute after the Speedy Tigers fell behind four minutes earlier.

In a tightly contested affair, both sides could not find a breakthrough in the first three quarters before the French drew first blood in the fourth quarter.

Coach A. Arulselvaraj saluted Marhan for his leadership and perseverance in rallying the team.

“When the chips are down, he always had a way to push his teammates. In all the games, he has inspired them with his leadership,” he said.

“France were tough as all their players play in the Belgian top division, and they’re also preparing for the World Cup qualifiers. So it was a quality game for us.

“We used all our outfield players except for Najmi (Farizal Jazlan). So there were lots of substitutions and movements, which made it a bit difficult to settle down.

“But that was necessary as I wanted our players to get more competitive minutes. I’ve told them to treat every training and match like a must-win situation to maintain their places in the squad.”

In the test matches, Malaysia lost the first game to Ireland 2-3 but bounced back in the second by beating them 4-2. Against Wales, they won both the matches 4-3 and 3-1. 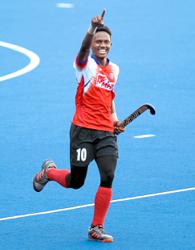