What a feeling: PKS-Uniten players jumping for joy after the final whistle. They beat UniKL Ladies 1-0 to lift the Vivian May Soars Cup.

Both sides impressed in the high-scoring affair which ended 4-4 and went to a shootout, which saw Terengganu prevail 2-0 to lift the trophy.

Earlier in the Vivian May Soars Cup final, it was also heartbreak for UniKL Ladies after they went down 0-1 to PKS-Uniten.

Four minutes later, he got his second through a penalty stroke that gave Terengganu goalkeeper Hafizuddin Othman no chance.

Terengganu reduced the deficit in the final seconds of the first quarter through Faizal Saari, who scored his 15th goal in the MHL when he capitalised on an error by UniKL goalkeeper Adrian Andy Albert.

In the second quarter, it was all Terengganu and their relentless attacks were rewarded with two goals as they went 3-2 up.

Mohd Arif Syafie Ishak scored the second goal in the 18th minute when his penalty corner shot beat Adrian, who should have done better to save it.

Akhimullah Annuar Esook showed he was one of the nation’s best young strikers when he finished off an Ismail Abu pass in the 22nd minute to give Terengganu the lead.

A pep talk from coach Megat Azrafiq Megat Termizi during half-time seemed to have galvanised UniKL as Razie Rahim then hit the equaliser via a penalty corner in the 35th minute.

UniKL’s joy, however, was short-lived as in the 38th minute, Terengganu regained the lead through Faizal, who got his second of the night.

UniKL refused to concede defeat when they drew level again in the 51st minute after a brilliant solo goal from Ashran Hamsani, who dribbled past three players before unleashing a shot past keeper Hafizuddin.

But Hafizuddin had the last laugh in the shootout as he saved all four of UniKL’s attempts as Terengganu needed to convert only two to land their sixth TNB Cup title.

As for two-goal hero Faizal, he ended the campaign as top scorer with 17 goals. 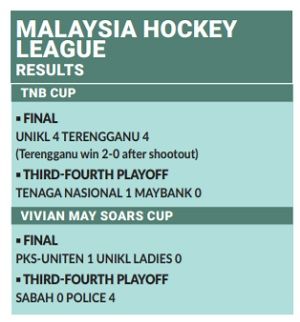