On Sunday, Tenaga thrashed Nur Insafi 6-0 in the Malaysian Hockey League at the National Hockey Stadium in Bukit Jalil, with Aminuddin scoring two penalty corners in the ninth and 56th minute.

Aminuddin said it was good to score many goals, but they were still a work in progress.

“I felt that it was not our best. We scored six goals, but it could have been more if we had been quicker with the ball movement. We should rectify that before our next game, ” said the 25-year-old.

“It’s good that we converted four penalty corners out of 10. Also, we penetrated into their D-box several times, so there is an improvement.

“In modern hockey, pace and movement are important. Sometimes skills alone are not enough.”

Meanwhile, assistant coach Mohd Amin Rahim said he wanted his boys to work on their field goal conversion too.

“We have four points now from two games, which is good but we have only scored one from a field goal. We need to work on that, ” he said.

“Points are important, but sometimes, the number of goals can make a difference in the standings too.” 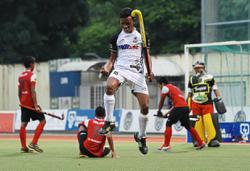