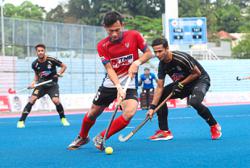 PETALING JAYA: Faizal Saari (pic) underlined his steely determination when he fought his way to regain his place in the national hockey team last year.

And he vows to bring that same spirit and form to the Terengganu camp in the Malaysian Hockey League (MHL).

The 29-year-old, who was omitted by Roelant Oltmans for the national team before making a return under new coach A. Arulselvaraj, believes that he is only getting stronger.

After almost three months of a centralised camp at the National Hockey Stadium in Bukit Jalil, the nimble player vows to flex his muscles in the league.

“The comeback feels good. My fitness is better and I am getting stronger. I just feel good, ” said Faizal.

“I’ve lost more weight, which will only help to boost my pace and work rate on the pitch. I want to show that I’ve not lost any sting in my game during the tournament.

“I want to help Terengganu win at least one trophy in the league. Competition is not going to be easy because all the teams look balanced without foreigners. But, as one of the seniors in the squad, I will give my best in every game.”

In the Razak Cup last year, Faizal had a great outing when he bagged 18 goals to help the east coast side finish second to Perak.

In the MHL last year, he was a true predator in the D-Box, as he scored 12 field goals and two penalty strokes for Terengganu, who were runners-up in the Charity Shield and TNB Cup.

This year, the side led by coach K. Rajan is banking on Faizal to deliver as they will not have the services of South Korean defender Jang Jong-hyun, 36, who ended the league last year with a whopping 23 goals from 17 matches. 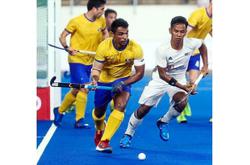