PETALING JAYA: Hockey is the latest sport to feel the ill-effects of the Covid-19 pandemic.

Next year’s Malaysian Hockey League (MHL) from Jan 14-Feb 20 could lose some its lustre as it will be played over one round instead of two and teams may be bereft of foreign players.

All matches will be held at the National Hockey Stadium in Bukit Jalil.

Malaysia Hockey Confederation (MHC) competitions committee chairman Datuk Seri Anil Jeet Singh said there seemed to be not much interest from teams in recruiting foreign players for the new season.

“Teams must let us know if they want foreign players because the competition is under MHC. So far none has come forward yet because to bring players from overseas is not easy because of the pandemic, ” said Anil.

“We have also shortened the duration of our league which I am sure the National Security Council (MKN) will allow us to hold.

The MHL will also be played behind closed doors.

“Honestly, as the competition’s director, I do not want to bring in spectators because I am afraid some would not be able to adhere to the standard operating procedures, ” said Anil.

The top four teams from the men’s and women’s league will qualify for the TNB Cup and Vivian May Soars Cup respectively.

The semi-finals would be held over two legs. 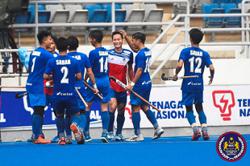