The Penangite has been elected as the Malaysian Gymnastics Federation (MGF) president during the national body’s 26th annual general meeting on Saturday.

The 75-year-old won the post uncontested after previous president Rachel Lau did not stand for re-election.

“I’m happy to see the majority of our affiliates turning up to show their support. I’m also pleased that the MGF now have a mix of new and old faces to bring the sport forward, ” said Gin Soon, who has served the northern state as the president for 18 years.

“The Covid-19 pandemic has affected the athletes’ training programme but we are slowly picking up pace. The tough times however, has given the leadership more time to plan for the future. We hope to hit the ground running when everything restarts, ” said Gin Soon.

Gin Soon, who is also a member of the Penang State Sports Council, said the major events for their gymnasts this year are the Tokyo Olympic Games and the SEA Games in Vietnam.

Malaysia will be represented by Farah Ann Abdul Hadi in Tokyo while preparations for the Hanoi Games started last month under coaches Ng Shu Wai and Natalia Sinkova. 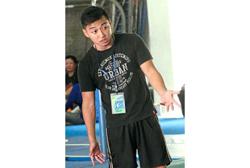 Gymnastics-Britain's Becky Downie misses out on Tokyo 2020 selection
Gymnastics-Biles takes lead at U.S. Championships with eye on seventh title
Gymnastics-After abuse Hernandez doing it her way for Olympic bid
Gymnastics-Nagornyy vaults into Tokyo Olympics as gold medal favourite
Shu Wai: Tracie’s retirement a loss to gymnastics
Gymnastics-'Old man' Whitlock still has more in the tank for Tokyo
Olympics-IOC now in 'delivery mode' for Tokyo Games, says Team GB head
Izzah believes she can return to her old form ahead of SEA Games
Jeremiah set to make Olympics debut thanks to turn of events
Right man for the job