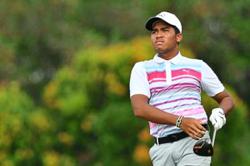 PETALING JAYA: Malaysia’s Shahriffuddin Ariffin finally ended a wait for his first title this year when he showed steely determination to clinch victory at the Selangor Masters.

Shahriffuddin carded a closing one-under 70 for a nine-under 275 after prevailing in a tense battle with Thailand’s Denwit Boriboonsub at Seri Selangor Golf Club yesterday.

He even shrugged off a double bogey on the par five 13th hole to beat the Thai teenager for the win.

The pair, who had traded birdies and bogeys to remain in contention throughout most of the day at the Asian Development Tour (ADT) event, were eventually parted in the finishing stretch.

Two-time Asian Tour winner Danny Chia closed with an even par 71, which was good enough for the Malaysian veteran to share third place on six under with Filipino Lloyd Jefferson Go, who also signed off with 71.

The 23-year-old from Melaka was thrilled to win his first ADT title of the year after coming close on a few occasions.

“I’m really pleased to get the ADT win here. It was really unexpected as I didn’t know who was leading towards the end. I was just focusing on improving my score shot by shot,” said Shahriffuddin.

“I couldn’t believe it at first, especially after the double bogey I had on the 13th.

Meanwhile, the 18-year-old Denwit took the loss in his stride.

“I was pretty tired on the back nine and couldn’t really control myself and my swing. But my game is going in the right direction. Sometimes it’s just not your day,” said Denwit, who closed with a two-over 73. 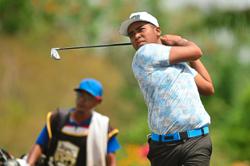