Giving the event a thumbs-up on its return are (from left) Srixon’s Raj Kumar, Joshua Rodriques, Takuya Ono and Transview’s Frankie Choo.

AFTER a two-year absence, the Srixon Club was held again, with the fifth edition staged at Kota Permai Golf and Country Club in Kota Kemuning, Selangor.

The event featured a full field of 128 players, hosted by Transview Golf and Dunlop Srixon Sports Asia, the local arm of Srixon Golf.

“We were excited when the management of Srixon called us up to resume the Srixon Cup,” said Transview Golf Malaysia director Frankie Choo.

“The tournament has always been among the most popular ones that we manage, and as expected, not long after we launched it on social media, all the spots were taken up, either by our regular clientele or new customers. “We are most thankful to Srixon for the support ,” said Choo. “The support included a golf cart bag in the goodies and numerous prizes and lucky draw gifts, along with Performance Gear apparel.”

At the prize-giving dinner, Dunlop Srixon Sports Asia managing director Takuya Ono said they were pleased with how the event was run and thanked the golfers for turning up and “making it a success.

“This is our fifth Srixon Cup and we are happy to see some familiar faces, and new ones too, and delighted that everyone (whom we spoke to) had a great time.

“We hope that they will continue to support the brand and as well as our other future events.”

In the A Medal, Lam Kong Foo (h’cap 7) clinched the honours with 42 stableford points.

The B Medal was won by Mohd Johari Tarmidi (17) with 38 points. Chong Soon Lin (18) was second, another point back, while Yuaraja Krisnasamy (18), Hasnata Hasan (18) and Ricky Koh (19) were only separated on countback after all signed for 37.

The gross title went to Jimmy Chia (3) after his 71 topped the leaderboard.

In the novelty challenges, the Longest Drive was won by Jung Young Gouk with distance of 268 meters, while Kenneth Chong took the Nearest-to-Line prize with a distance of three feet six inches, and the Nearest-to-Pin prize awarded to Mohd Hazriq, who was just one foot four inches from the pin. 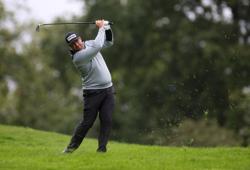