May 21, 2022; Tulsa, OK, USA; Tiger Woods plays his shot in to the sod of the fairway bunker on the ninth hole during the third round of the PGA Championship golf tournament at Southern Hills Country Club. Mandatory Credit: Orlando Ramirez-USA TODAY Sports

TULSA, Oklahoma (Reuters) - After narrowly making the PGA Championship cut a defiant Tiger Woods had predicted he still had a chance to hoist the Wanamaker trophy but any remaining belief disappeared in a nightmare nine-over 79 third round on Saturday.

Playing his second event in a comeback from a career-threatening car crash, just making the cut at Southern Hills Country Club was something to celebrate but for Woods and his thousands of fans there was precious little to cheer -- although they did every shot. 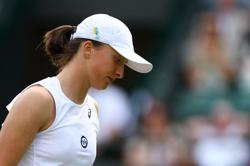