TULSA, Oklahoma (Reuters) - Tiger Woods withdrew from the PGA Championship on Saturday, after carding one of his worst rounds ever at a major tournament: a nine-over 79.

Woods, in his second start after a car crash 15 months ago nearly cost him his right leg, appeared dejected and in pain as he trudged off the 18th green at Southern Hill Country Club. 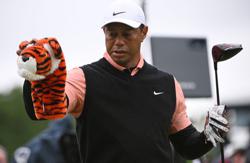