PETALING JAYA: Malaysia’s Ashley Lau (pic) continues to bloom as others fade since making a comeback in January.

The 20-year-old capped off her junior year (third year) at University of Michigan on a high note by making the honourable mention list of the Women’s Golf Coaches Association (WCGA) Division 1 All-American Team, akin to the “All-Star” team of the season, on Friday.

Another Malaysian Alyaa Abdulghany, who’s a senior (final year) at University of Southern California, was also among the outstanding 40 golfers honoured by the WGCA.

It’s the third straight year that Alyaa had made the list but a first for Ashley.

The Sarawakian was elated to receive the prestigious recognition and becoming only the second golfer in her school history after Belgian Elodie Van Dievoet in 2017.

“I never gave it much thought so it came as a surprise to me, ” said Ashley, who was part of the team that won silver at 2019 Philippines SEA Games.

“This will be a motivation for me to work harder for a better future.”

Ashley is certainly enjoying her best season yet in the United States where she has registered six top-20 finishes in just as little as eight tournament starts.

The highlight was winning her maiden victory at the Indiana Invitational in April as she recorded a 72.64 scoring average.

Ashley also inspired University of Michigan to a runner-up finish at the Big Ten Conference Championship by coming in third individually with a decent score of five-under.

She also helped her school to qualify for the National Collegiate Athletic Association (NCAA) Division 1 Women’s Championship last week, securing herself a debut appearance in the prestigious season finale.

The team finished 20th out of 30 teams while Ashley ended her individual campaign 53rd in the 132-player contest.

“I wasn’t expecting much this season as I have not played competitively for a year since the pandemic but the practise with the team in the fall (September-December) helped, ” she said.

“As the season progressed, I saw myself playing well, shooting under par and I told myself to really take it easy as I did not want to get ahead of myself.”

Asked what areas that she need to improve on now that she would be playing senior golf, Ashley said: “I mostly look at stats. So a big goal of mine is to lower my scoring average this coming season.” 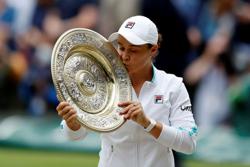