PETALING JAYA: Malaysian fans can soon count on another Green to bring glory to the nation in the professional golf scene.

Galven, 21, has followed in the footsteps of his national No. 1 elder brother Gavin, by making a good impression in his first four professional appearances during a three-week stint on both the Big Easy Tour and IGT Challenge Tour in South Africa last month.

He made the cut in all the events with his best result being a tied-21st at the Big Easy Tour’s seventh leg in Krugersdorp.

“I’m fortunate to do what I love most as a job now and excited to see what the future holds, ” said Galven, who’s set to graduate from the University of New Mexico with a major in psychology next month.

Having just joined the play-for-pay ranks, Galven believes it’s imperative for him to get the hang of his new career first before setting his target.

“I think my main goal right now is to secure a Tour to play in and have playing rights in them. Also, I just want get comfortable out there first, ” he explained.

“Based on my recent experience, one thing that I learnt about playing golf for living as compared to being an amateur is that I need to really stay focused and patient all the time. Every shot can make a whole world of difference.”

With the lack of playing opportunities in the country and around the region due to pandemic, Galven is willing to explore uncharted waters by giving the Sunshine Tour card a shot.

Galven intends to return to South Africa to resume his Big Easy Tour and IGT Challenge Tour campaigns at the end of next month.

“I guess with the Covid-19 situation now, I’ll definitely cherish every single opportunity that I can get, ” said Galven.

“No Malaysian has taken this route, who knows I can be the first to do it.”

Galven has always kept himself motivated by trying to outdo Gavin’s achievements during his amateur career, and expect him to do the same too in future in the professional ranks.

He also followed in Gavin footsteps by becoming collegiate golf winner in the US. 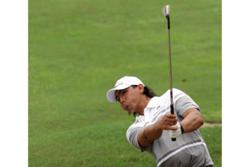