He gave it his all: Gavin came good when it mattered most when he fired a sublime 64 to claim a four-shot victory.

SHAH ALAM: Gavin Kyle Green secured himself a timely boost ahead of his return to the European Tour next week by winning the PGM MNRB Championship for his first title in three years.

After struggling in the first three rounds, the 26-year-old came good when it mattered most when he fired a sublime 64 to claim a four-shot victory with a 13-under 275 total at the Glenmarie Golf and Country Club here yesterday.

Gavin, starting the day four shots off the pace, stormed into contention with four birdies in his first seven holes.

A bogey on the ninth was hardly a setback as he responded with an eagle on the 11th before picking up three more shots on the 13th, 15th and 16th to end a three-year drought after he last triumphed at the 2017 Taiwan Masters.

Gavin was delighted he has finally shook off the rust to produce a solid final-round display.

“It’s really nice to win again ... it’s been a very long time,” said Gavin, who had less than two weeks to practise after completing his two-week quarantine on Sept 13 upon returning from the United Kingdom.

“Obviously, playing in the higher-ranked circuit (European Tour since 2018) is a lot harder to win and I have been close a couple of times.

“It’s definitely a morale boost knowing my game is shaping up nicely (ahead of his next tournament, the Scottish Open from Oct 1-4).

“After the quarantine, I just lost it and it felt so different. It took me a while to get back to it.

“I was hitting horrible shots in the first three days, it had gone left and right.

“I tried switching to new equipment but it didn’t work.

“Finally, I managed to put together a solid round today, hitting better iron shots and made some putts and everything changed,” added Gavin, who took home the RM31,500 winner’s purse.

Seasoned campaigner Sukree Othman was second on 279 followed by Khor Kheng Hwai, a further one shot back.

In the women’s event, Aretha Pan staved off a spirited challenge from amateur Winnie Ng Yu Xuan to win by one stroke.

“It was a victory to savour as I didn’t expect to win,” said Aretha, who walked away RM10,000 richer, after mixing three birdies with a bogey to post a closing 70 for a 290 total.

“I didn’t practise as much due to a wrist injury and I wasn’t supposed to take part.

“I decided to travel after all (from Sabah) after my golfing buddies back home encouraged me. It turned out to be a great decision.”

The event marked the successful return of the PGM Tour after the start of the 2020 season was delayed due to a licensing issue and the Covid-19 pandemic.

The next stop is the PGM Northport Championship at the same venue from Oct 21-24. 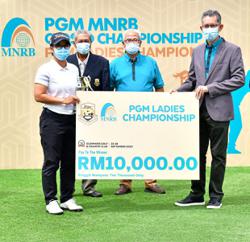 PGM season off to good start 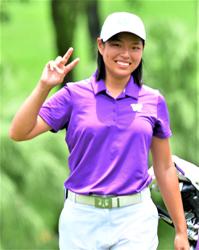