PETALING JAYA: Kelly Tan (pic)saved her best for last with a superb final round of six-under 66 to finish tied for 24th at the Cambia Portland Classic in the United States.

The 26-year-old carded six birdies including five on the back nine in a bogey-free round to soar up the leaderboard on a six-under 210 total at the Columbia Edgewater Country Club on Sunday.

Kelly’s effort saw her finish 41 rungs higher than where she started on the final day.

It was certainly a great comeback from her after she posted a poor 74 in Friday’s opening round.

She then made amends with a 70 to barely survive the cut in the 54-hole contest.

Kelly has now made eight cuts in nine starts, finishing no worse than a top 30 on four occasions.

A consistent run of performances also comes with good monetary rewards as Kelly has now taken her season earnings past the US$100,000 (RM412,000) mark.

Kelly will take a one-week break before heading to New Jersey for the Shoprite LPGA Classic scheduled from Oct 2-4 at the Stockton Seaview Hotel and Golf Club. 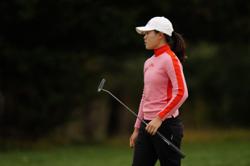