There have been calls to change the women’s game for the better.

IN his 1981 song B Movie, American poet and jazz musician Gil Scott-Heron spoke of the prejudices in society and how they impact our everyday lives.

it (perhaps not the song directly) when she referenced the

“Black Lives Matter movement and the barriers” women face in our sport.

She told skysports.com the powers that be in golf needed to take stock of the sport with a view to address the imbalances in the men’s and women’s codes.

She said that “golf, like pretty much every industry, has to take a hard look at itself and see what it can do better.

“For me, being a woman in golf speaking about the opportunities and the access issues we’ve had, I know that as well-meaning as males can be in this situation, they can’t necessarily understand it from the same perspective” she told skysports.

“I think as white people, we need to address the Black Lives Matter movement and racial inequality in a similar way. We can emphasise and we can listen, but we can’t actually understand what it’s like. I think we need to take the time to do that, before we can instigate any meaningful change.”

The 26-year-old was speaking after she won the second event of the Rose Ladies Series, a new Tour established for British nationals and sponsored by England’s former world number one and 2013 US Open champion Justin Rose and Kate, his wife.

The Black Lives Matter movement has been in the news a great deal recently – prompted by the killing of black American George Floyd, who was slain by a white police office in Minneapolis on May 25.

Golf has been one of the sports which has had some players speaking out against social injustices and the minuscule numbers of black pros in the game.

The US PGA Tour, through their commissioner Jay Monahan, have hinted that they wanted to “act and be part of the solution” to help fix these problems.

But part of the issue is that while there are only a few black players (not more than a handful) at the sharp end of the sport, so too is it with the sponsors and sponsorship.

So far nothing has come of all the rhetoric and Scott-Heron’s words remain relevant to this day.

The jazz poet, who was widely known as a spoken-word performer, said “... all consumers know that when the producer names the tune, the consumer has got to dance”. 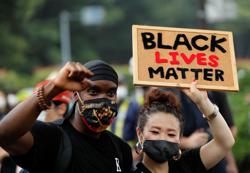