GOLF may seem a sombre kind of game, but it has its moments of frenzied craziness. Malaysia’s top golfer Gavin Kyle Green remembers one such moment.

He had been in the final flight of the Aboitiz Invitational in Manila in 2016 and finished second. But he had no time to lose. He rushed to the airport, weaving through the Manila traffic as a friend made sure their plane stayed on the tarmac until they arrived.

He took the flight to Kuala Lumpur, switched bags – his mother was waiting with a second set of luggage – and jumped on another flight to Rio for the Olympics!

It was one crazy ride, he said. And through it all, he had one very important companion – his father.

Gary Green has been the single most influential figure in Gavin’s rise in golf. The father introduced him to the game, caddied for him when he was a boy, continued doing so as he rose up the ranks to become a key player in the European Tour, and still remains by his side through thick and thin.

“He’s a cool dad, ” said Gavin. “We have a great relationship and we spend a lot of time chatting and discussing things, playing golf and working out. He’s a man of few words but he is very detailed. He also loves working around the house and playing chess. Most importantly, the sacrifices he has gone through just to get us where we are today has been nothing short of amazing.

“Without him, I wouldn’t be where I am today. He has been instrumental in my golf career, from the time I got into golf as a kid, caddying for me, and guiding me through my professional career, especially when I first started out as a pro. He was the key planner and charted out the timeline for me to turn pro.” 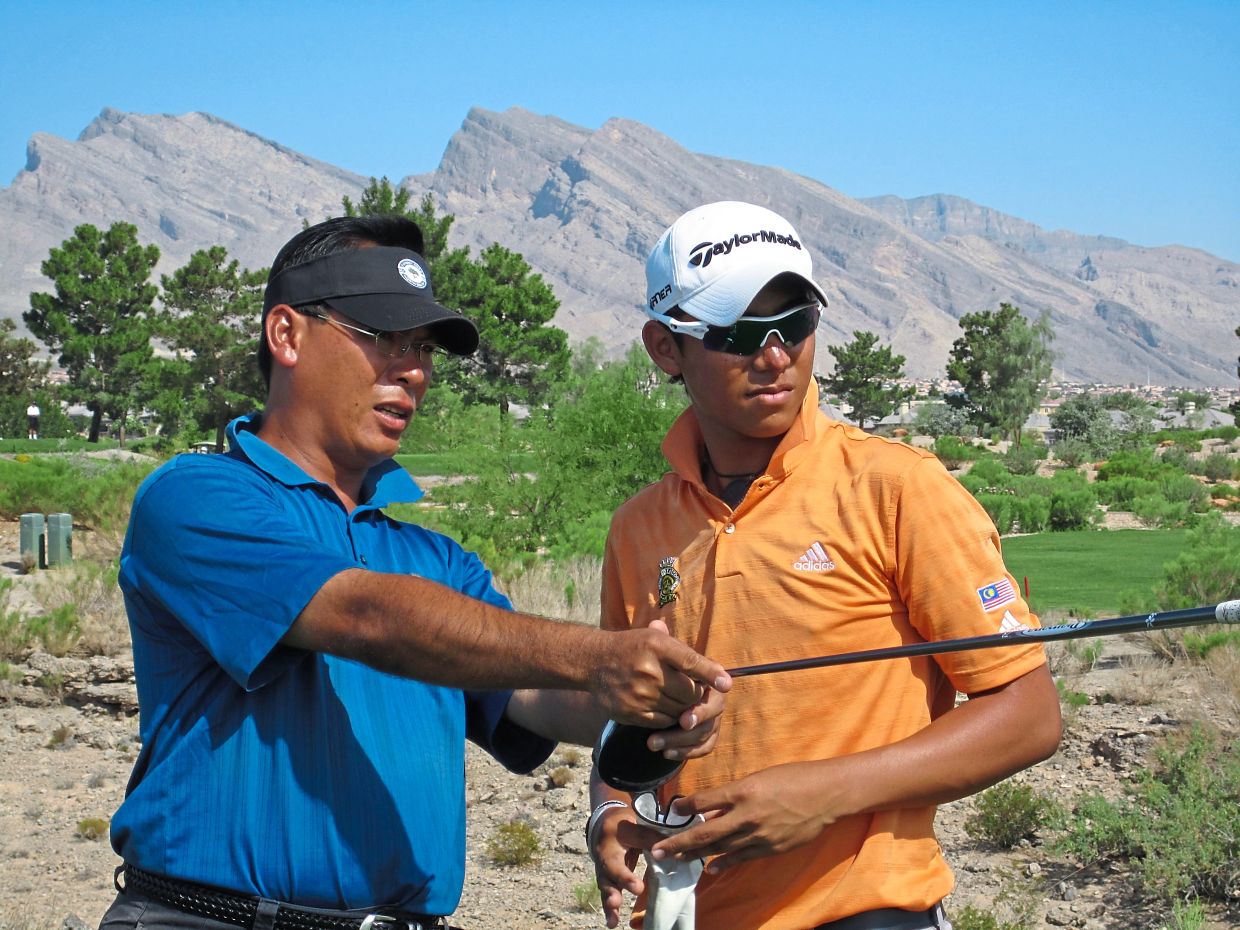 Gary giving some pointers to Gavin.

Gavin said his father was a good caddy, too.

“We do pretty well together and he tries to be very professional and neutral. Sometimes, the father-son dynamics is a little stressful but I must say he does a lot of homework to prepare.”

That, he said, was why it was so memorable when he made the cut at his first Major (at the British Open in 2018) at Carnoustie. “It was great to be able to share that with my dad as he was on the bag, ” said the 26-year-old.

Gavin is not the only one to benefit from the caddy daddy. His 20-year-old brother Galven Kendall is also enjoying a decent collegiate golf career in the United States and could turn professional in two years.

Galven said he had lost count of his father’s contributions to his career. “He caddies for me whenever possible and I like it. He has a different way of thinking and always gives a new perspective on things.

“He may not be able to play to a single handicap but he does a lot of research and that helps a lot. He went for the golf rules exam and he analyses things for us.”

Galven added that he loved having his father as caddy as it took away all pressure. He always tells me to be myself, that I am my own person and I am charting my own course.

“I might have been a bit young then but winning Junior World’s when I was six was really something – and dad was on the bag! When I made my first cut at an Asian Tour event, at last year’s Thailand Masters, he was also caddying for me.”

With his two sons doing so well, Gary is obviously a proud dad.

“I am proud of how they both have grown up into fine young men and how they are both making Malaysia proud. One of the biggest moments was probably when Gavin won the Asian Tour Order of Merit. He is the first Malaysian to do so, so that was really something.

“Galven won the Mountain West Conference last year and Junior Worlds when he was six! Winning the Junior Worlds at that age by 13 strokes in the US opened our eyes too and proved that Malaysians are capable of making it to the world stage.

“Both of them winning the TSM (Tan Sri Muhyiddin) Golf Challenge three times each was also something of a wow, ” he said.

“Gavin has a team comprising his coach, his manager, his caddy, his fitness trainer as well as my wife (Vivienne Beh) and I. However, they are all mostly based out of Malaysia. So, I step in and help out whenever I can, ” said Gary.

“Family is very important to us. The relationship between us is something that we treasure. They know that they have to be thankful to God and try to live life as good people, ” he said.

> From us at StarSport. Happy Father’s Day to you, Gary!