Woods four-putts in third round as Riviera drought continues

(Reuters) - A shocking four-putt took tournament host Tiger Woods completely out of contention at the Genesis Open in Los Angeles on Saturday as he ended the third round 15 strokes behind leaders Rory McIlroy, Adam Scott and Matt Kuchar.

At a tournament where he made his first PGA Tour appearance as a skinny 16-year-old amateur in 1992, Woods carelessly missed a two-foot putt at his fourth hole, the 13th.

He then compounded his error by also missing the next one, from about three feet.

Any chance of Woods finally winning at Riviera, a venue that has proved strangely elusive over the years, will have to wait another year, while an opportunity for a record 83rd tour victory will also be put on hold for a couple of weeks at least.

Woods is not playing next week's WGC-Mexico Championship, and was tight-lipped about his schedule after that, stating the obvious saying his priority was to peak in April at the Masters, where he will defend his Green Jacket at Augusta National.

In explaining his decision to skip Mexico, he said he was a "little rundown" and did not feel it wise to tee up two weeks in a row just now.

"I feel stiff, but I have weeks like that, especially in the cold mornings like it was the other day," the 15-times major champion told reporters after shooting five-under-par 76.

"Don't quite move as well and that's just kind of how it's going to go."

Woods had a spinal fusion nearly two years ago and he said his 2020 schedule would be very light, as it was last year, when he played just 15 times, including the Presidents Cup.

"I won't play a lot more than that just because of the physical toll, and I want to stay out here for just a little bit longer," said the 44-year-old.

(Reporting by Andrew Both in Cary, North Carolina) 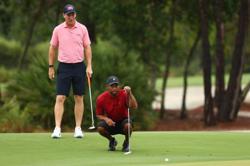 Woods and Manning beat Mickelson and Brady in charity match 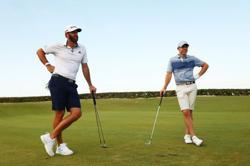 Golf: Barred from the course, fans tune-in to skins match