Members of the media in high spirits prior to the tee off at Kota Permai.

KOTA Permai Golf & Country Club in Kota Kemuning Shah Alam was a hive of activity in recent weeks, hosting a series of events that included their annual club championships, a media tournament and one for their guests.

The club championships were split into three medals, namely the men’s, seniors’ and ladies’, and with gross and nett categories in each.

Not surprisingly, the most intense competitions were featured in these three divisions

The men’s championship crown was won for a record eighth time by Jimmy Chia Kee Joo, who wrapped up the title with an emphatic seven-stroke victory. The scratch player had rounds 77, 77 and 78 for a16-over 232 tournament total.

Defending champ Alan Chong Chek Fei could not keep pace with Chia and had to settle for second place. Playing off a one-handicap Chong shot rounds of 77, 85 and 77 for a 239 total, while Thomas Michael Henson (6 h’cp) was third after posting scores of 83, 79 and 81 for his 243 total.

In the nett category seven-handicapper Chang Thean Siang finished with 224 total after rounds of 72, 72 and 80. He was just a point clear of last year’s senior champion Tajudin Supian (6) who had rounds of 74, 76 and 75 for his 225 nett total and runner’s-up spot on countback. Nine-handicapper Lim Yeow Leng also shot a 225 nett (71-78-76) for third place.

Pua Yii Shiuan (6) who shared the lead in the second and final round last year, before losing out, clinched victory in the seniors’ category with a 154 (80-74) gross total. 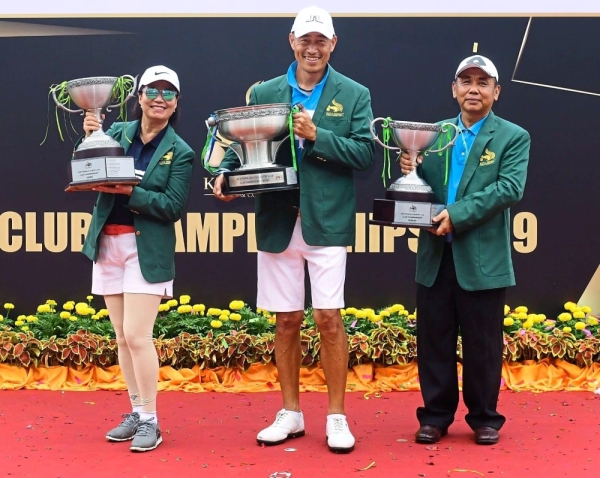 The ladies’ nett trophy went to Ang Kwi Eng (24) who managed a 146 total that gave her a one-shot triumph over Hannah Azuree.

The three champions were presented with the customary champions’ green jackets and challenge trophies by director of Club Operations Tang Meng Loon and Golf Committee chairman Ng Say Hoe, who said they were again delighted with the high standard of play exhibited during the championships.

“The course was well set-up,” said Ng. “The rough was deliberately left a little longer than usual and the green speeds were in the range of 12 on the Stimpmeter.”

The honours in the media event went to 14-handicapper Aziz Abdul Hassan of New Straits Times. Last year’s runner-up finished with 37 points to win ahead of Utusan Malaysia’s Imran Mohd Nor (18), who was runner-up on 36 points on countback.

The guest category title went to Jack Loi (11) of GolfSmart’s. He too finished with 37 points.

Gamuda Berhad executive director Datuk Goon Heng Wah presented the winners with their prizes and thanked the event sponsors for their “continued” support.