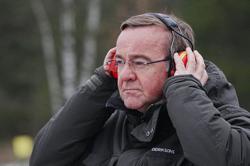 BERLIN (Reuters) -Some 17 million people tuned in to broadcaster ZDF's coverage to see Germany play Spain in the World Cup on Sunday while 16.6 million people watched the match in Spain, according to data from audience measurement firms AGF and Barlovento.

Germany's Niclas Fuellkrug scored an equaliser after Spanish striker Alvaro Morata had opened the score in Sunday's match, which aired at 8 p.m. local time in both countries. The 1-1 draw allowed Germany dodge an early exit from the tournament.

The country's first match of the 2022 World Cup on Nov. 23, in which Japan beat the four-times champions 2-1, was viewed by 9.2 million people in Germany, while Spain's first match, a 7-0 victory, against Costa Rica, which aired on the Spanish national broadcaster TVE and pay television's Gol Mundial, attracted 10.8 million viewers.

Spain's population at 47 million is much smaller than Germany's 83 million.

Spain tops the Group E standings with four points and only needs a draw in their final game against Japan to progress.