KUALA LUMPUR: Johor Darul Ta'zim (JDT) broke Selangor hearts with a 2-1 win in the Malaysia Cup final to become the first club side to achieve the quadruple in Malaysian football on Saturday (Nov 26).

A resurgent Selangor, riding high after former national coach Tan Cheng Hoe took over two months ago, had high hopes of winning their first silverware in seven years and went on the offensive from the start at the National Stadium in Bukit Jalil.

Selangor took the lead just two minutes before the break after Brazilian Herlison Caion converted a penalty he won after he tripped.

But JDT quickly rebounded back with with Brazilian Bergson da Silva scoring in added time before the break.

JDT tightened their game in the second half and it was Argentinian Fernando Forestieri who scored what turned out to be the winning goal in the 58th minute.

JDT, having won the Charity Shield, the FA Cup and Super League titles earlier, thus won their third Malaysia Cup title after 2017 and 2019 to seal their quadruple bid.

33-time champions Selangor were competing in their first Malaysia Cup final since 2016 where they lost on penalties to Kedah.

An estimated 80,000 fans attended the Malaysia Cup final despite it taking place in the midst of the World Cup in Qatar. 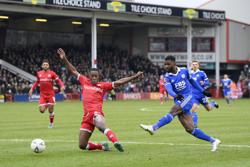