Police conduct an investigation next to a torched vehicle outside the Kanjuruhan stadium in Malang, East Java. - AFP

Malang: The death toll from an Indonesian football riot that turned into a stampede was revised down to 125 on Sunday due to double counting, an official told local media.

"Today the death toll is 125. 124 have been identified and one has not," said East Java deputy governor Emil Dardak told broadcaster Metro TV, citing data collected by local police from 10 hospitals.

"Some names were recorded twice because they had been referred to another hospital and were written down again. - AFP 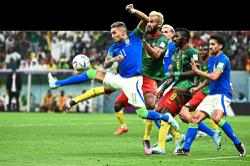