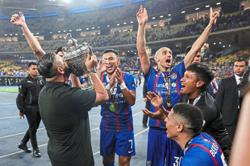 PETALING JAYA: It did not come as a surprise when Terengganu’s Muslihuddin Atiq was linked to the best club in Malaysia, Johor Darul Ta’zim (JDT), after his scorching performances in the Malaysia Games (Sukma).

But the Southern Tigers have doused the fire by saying that they did not approach the 20-year-old winger, who helped Terengganu end their 12-year wait for the gold medal in the biennial Games.

Three days ago, Sukairi revealed that Muslihuddin was approached by the FA Cup champions after state assemblyman Hanafiah Mat sought his advice on whether the player should make the move or not.

Muslihuddin’s contract with Terengganu ends in November, which sparked the talk of his move to JDT.

“JDT would like to clarify that no offer was made to Muslihuddin. JDT are in discussions with several new foreign players and may also possibly sign one local player, but it’s not Muslihuddin,” said Edwards, who played for Johor in the past.

“We are surprised by the news that an offer was made to Muslihuddin. We are also curious as none of our technical staff nor myself as the technical director or sporting director Martin Prest have made an offer to the player.”

Besides helping them with the gold, Muslihuddin impressed in the tournament by scoring three goals and bamboozling defences with his dribbling and astute technique.

As for JDT, they are already looking forward to the next season and are in for a busy transfer window when it starts in December.

JDT owner Tunku Ismail Sultan Ibrahim revealed that he was interested to have a player like Papu Gomez in his squad. Gomez is an Argentine international, who currently plays for La Liga club Sevilla.

As for the local player, it is learnt that Dion Cools, who currently plays for Czech club FK Jablonec, is the player linked to the club.