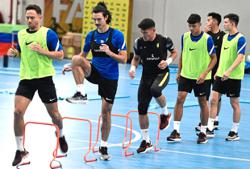 PETALING JAYA: National coach Kim Pan-gon has constantly reminded his boys that their world ranking of 148 does not mirror their true abilities.

And the boys proved him right by finishing as the runners-up in the King’s Cup in Thailand.

The team lost to Tajikistan 0-3 in the penalty shootout after they drew 0-0 in regulation time on Sunday.

They also drew 1-1 to Thailand but performed beyond expectations to upstage the Thais 5-3 in the shootout.

Tajikistan and Thailand are ranked 109th and 111th in the world respectively.

With their strong showing against the higher ranked teams, Harimau Malaya are expected to move three rungs to 145th when FIFA announce the next ranking changes.Pan-gon was happy that the boys were able to fight against the top sides.

“That’s why I do not believe that rankings are the reflection of the team. When I took over Malaysia, we were at the 154th spot,” said the Korean.

“I told everyone that ranking does not mean that we are bad. We’ve what it takes to face higher ranked sides.

“And in the King’s Cup, our boys were able to challenge Thailand and Tajikistan. With these results, we can move forward.

As for the game against Tajikistan, Pan-gon admitted he expected a challenging encounter, which was made tougher with the inclement weather.

“We expected a tough game because they are 109th and physically strong. The rain made it difficult for us to play. As a coach, I expected more from the boys because I know their quality, but I’m happy with the positives,” said Pan-gon.

“They did well against the higher-ranked nation in regulation time. As for the penalties, it was 50-50. But I have no regrets.

“We did our best. We will look forward to assessing this team and prepare for the AFF Cup in December.”

Wingbacks Declan Lambert and Azam Azmi Murad made their debut as substitutes against Thailand while centreback Sharul Nazeem Zulphakar came in as a substitute against Tajikistan.

One of the standouts was goalkeeper Ahmad Syihan Hazmi who had the tournament of his life by making nine saves in two games.

Centreback Ahmad Khuzaimi Piee and rightback Matthew Davies also shone with their defensive work, while Brendan Gan, returning to the team after recovering from cancer, showed why he had remained as one of the best midfielders in the nation.