PETALING JAYA: It was only fitting that goalkeeper Azri Ghani became the hero for Kuala Lumpur in the 6-5 penalty shootout win over Vietnamese club Viettel in their AFC Cup Asean zone semi-final on Wednesday.

The 23-year-old was a man seeking redemption as it was his error of judgement that cost Malaysia a place in the SEA Games final in May.

In the semi-final against host Vietnam, Azri misjudged the direction of the ball during a set-piece which resulted in the Harimau Muda losing 1-0 in extra time.

That blunder was still fresh in Azri’s mind as KL took on Viettel at the Thong Nat Stadium in Ho Chin Minh City.

Eerily, the game also ended 0-0 after full time – just like in the SEA Games semi-final. But a more confident Azri gave an immaculate display, catching the eye with some superb saves before stopping a crucial spot-kick by Bui Duy Thuong to help the City Boys reach the final.

KL will take on PSM Makassar in the AFC Cup Asean zone final at the Cheras Football Stadium on Aug 24 for a place in the Inter-Zone semi-finals against India’s ATK Mohun Bagan on Sept 7.

A thrilled Azri chose to play down his heroics and saluted his teammates for the hard-earned win.

“My save alone didn’t get the team to the final. We all worked our socks off to frustrate Viettel, who dominated the game,’’ said the former Kedah and Perak custodian.

“In the SEA Games, Malaysia lost because of my mistake. And I haven’t stopped thinking about how I can make up for that. When I got the chance to play in the AFC Cup, especially against a side from Vietnam, I knew I had to do well.

“I must thank coach Bojan (Hodak), who believed in me. A penalty shootout is tough because it’s nerve-wracking for anyone. So I’m thrilled to make the crucial save.

“For someone who doesn’t get to play regularly in the league but is thrust into such a big game, I would be lying if I said I wasn’t nervous. But my mates were always there to keep me calm.’’

Hodak made a bold move by picking Azri to start instead of first-choice keeper Kevin Mendoza.

The Croatain admitted that Azri was nervous before the match but grew in confidence and showed his qualities as the game progressed.

“I know many people will question me on picking Azri over Kevin for the job but I have my reasons,’’ said Hodak.

‘‘I could only field four foreigners and kept Kevin on the bench to suit my match strategies. It was a tough match but Azri stood tall on the night.

“I had trust and faith in him as he was with me for two years in the Under-19 national team.

‘‘He has the capabilities and qualities to make a difference.’’

“This is a great result for KL. Over the two years KL have been creating history and now another piece of history has been added.’’

“It wasn’t our best performance against Viettel, but we were disciplined and worked hard for 120 minutes to hold them.

“As for the final, playing in Cheras will be an advantage but we can’t take that for granted.’’ 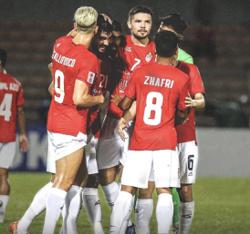 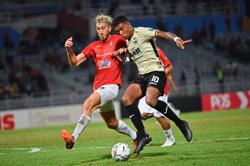