Malaysia FA Cup: Melaka players will give their best in quarter-final match against JDT, says coach 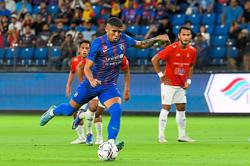 PETALING JAYA: The Southern Derby between Melaka and Johor Darul Ta’zim (JDT) will be one of the ties to watch in the Malaysia FA Cup quarter-finals.

In a draw conducted by the Malaysian Football League (MFL) on Monday (July 4), the Southern Tigers champions in 2016 will take on the Mousedeers at the Hang Jebat Stadium in Melaka on July 23.

Melaka will be the home side, and that's an advantage for interim coach Asri Ninggal, who recently led his side to a 1-1 draw against JDT, the defending Super League champions.

"When you're in the quarters, you can't choose, and the draw got us JDT. We will give our best. We faced them last Saturday and I hope that would give us an indication of how JDT plays," said Asri to the Malaysian Football League.

"I know my boys would give their all in the game."

Meanwhile, 1995 FA Cup champions Sabah could take on Selangor or Kuala Lumpur in the quarter-final on the same date.

The second-round match between Selangor and Kuala Lumpur will take place at the Petaling Jaya Stadium on July 8.

Kedah or Terengganu could face the only Premier League side Kuching City in the quarter-final.

The Canaries and Turtles will face off in the second round at the Sultan Mizan Stadium in Gong Badak on July 6.

Kuching’s coach Irfan Bakti, who formerly led Terengganu, said both sides would be a challenge, and Kuching will always remain underdogs in the competition.

"We will face either of these two sides away first. It's not going to be easy. Terengganu is in their rhythm, while Kedah’s imports have looked solid, especially in the AFC Cup."

The quarter-final winner of that game will face either Sabah, Selangor or Kuala Lumpur in the semi-finals.

Three-time champions Pahang will take on 2002 champions Penang at the Darul Makmur Stadium in the first-leg quarter-final. The winner of this tie will face JDT or Melaka.