The former national assistant coach led his side to a great fightback to edge hosts Melaka 3-2 at the Hang Jebat Stadium on Saturday.

The Mousedeer took the lead with a brilliant strike from Sony Norde in the 18th minute, but Sarawak equalised through Gonzalo Soto six minutes later.

Melaka again went ahead through leftback Syazwan Andik in the 34th minute but the Golden Hornbills drew level when Lee Chang-hoon scored from a free-kick in the 61st minute before Togolese striker Francis Kone turned match winner in the 93rd minute.

Balachandran said the win revealed the players’ desire to get Sarawak out of the relegation zone.

“It’s special to win in my debut with this team,” he said.

“When I joined, I changed the training methods and emphasised more on high intensity. I also wanted to introduce a new playing philosophy, which is to have quick transitions from defence to attack.

“The boys struggled initially but they have adapted now.

“Our next game is on July 17, so they will be given a break to enjoy the win.”

Melaka accepted the defeat but felt that Sarawak’s second goal should not have been allowed due to a foul.

Chang-hoon’s free-kick hit the defensive wall, which led to the ball looping downwards towards the goalpost.

Referee Mohd Khairulsyahmi Ahmad Khalidi, however, didn’t see it as foul and that drew the ire of Bryan and his teammates.

In fact, a source from Melaka revealed that they would lodge a complaint about the incident.

“We did well in the first half but in the second, Sarawak just knew what to do. There were chances but we didn’t convert them ,” said assistant coach Nazrulerwan Makmor.

Melaka are currently 10th with seven points from eight matches while Sarawak United are seventh with 10 points from 11 games. 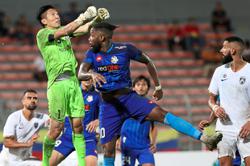