Soccer-Liverpool under pressure to beat Real in Champions League final

PARIS (Reuters) - Liverpool are unbeaten since March, have lost only three games all season and have already lifted two domestic cups but they will play Real Madrid in Saturday's Champions League final under pressure to avoid ending the campaign as nearly men.

Having spent the latter part of the season being touted for a unique quadruple, they face the prospect of potential double disappointment after missing out on the Premier League title to Manchester City by a solitary point on the last day.

For Real the situation could not be more different. They began the season with low expectations but ended up romping to the LaLiga title and became the comeback kings of Europe after heroic and improbable fightbacks en route to the final.

So while bookies' favourites Liverpool have lost fewer games in all competitions this term than Madrid have in the Champions League alone, the pressure appears to be more on the Reds to lift the trophy at the Stade de France.

Real are enjoying a dream season that started with almost no expectations and could end up with a LaLiga-Champions League double thanks mainly to an amazing season from Karim Benzema.

His 15 goals in 11 Champions League games, 10 in the knockout stage, have put Real on the verge of winning Europe's elite club title for the fifth time in nine years and the France striker as favourite to claim the Ballon D'Or after scoring 44 goals, with 15 assists, in 45 games in all competitions.

It has been a stellar season that took some time to arrive for the 34-year-old Frenchman, who took has cemented a place as the undisputed leader and most influential player in a team that needed a talisman after losing Cristiano Ronaldo four years ago.

He has only netted once in his four Champions League finals but that was against Liverpool in 2018 when he opened the scoring in a 3-1 win thanks to a horrendous error by Loris Karius on a nightmare night for the German goalkeeper.

Memories of that match will provide an extra dose of confidence for Benzema and his tam mates on the back of Real's hugely impressive run of comebacks in this season's competition that have built a feeling of invincibility for Los Blancos.

They came from behind in all their knockout stage clashes against Paris St Germain, Chelsea and Manchester City to win with last-minute goals that turned the Bernabeu into a place where fans and players started believing miracles come true.

Real won a record-extending 35th LaLiga title with a month of the season left and are in their 17th European Cup final - an accomplishment that allowed Ancelotti to give his players some rest as they go into the final with no major injury concerns.

They face a Liverpool side that came up just short in their race with Manchester City for the Premier League title, ending their dream of an unprecedented quadruple after they lifted the FA Cup and League Cup with shootout wins over Chelsea.

Liverpool's Mohamed Salah, Virgil van Dijk, Fabinho and Thiago have suffered with injuries over the last few weeks and there are questions over how fit they will be for the big game.

Salah has said he will be seeking revenge for the "worst moment of his career" when he came off injured early in the 2018 final defeat by Real - words that were noted by Real’s players and have given them added motivation to lift the trophy.

(Reporting by Fernando Kallas in Paris; Editing by Toby Davis and Ken Ferris) 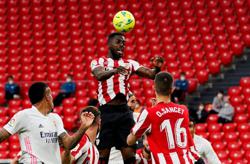