(Reuters) - Liverpool are still assessing the fitness of Mohamed Salah and Virgil van Dijk ahead of Tuesday's Premier League trip to Southampton where they could close the gap on leaders Manchester City to one point, manager Juergen Klopp said on Monday.

Forward Salah and defender Van Dijk were substituted during Saturday's FA Cup final against Chelsea, which Liverpool won on penalties to lift their second trophy of the season. 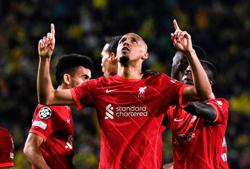 Creativity, education and learning beyond IR4.0