Maloney: Lapses against Laos a wake-up call before Singapore clash 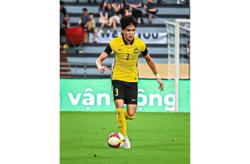 Going all out: Malaysia’s Quentin Cheng (left) vying for the ball with a Laos player during the Group B match at the Thien Truong Stadium in Nam Dinh. — Bernama

THE Harimau Muda have buried the ghost of losing to Laos twice in the AFF Under-23 Championship earlier this year but coach Brad Maloney still feels a little “haunted” after his charges’ 3-1 win in Group B of the football competition.

The Australian couldn’t help complaining that his side made it difficult for themselves in some periods of the game and the goal conceded is an eye opener ahead of their next match against Singapore on Saturday.

“We gave the Laos players too much space and time at certain moments, and those lapses could have been costly. They have some quality players who could have punished us,” said Maloney.

“Let’s take this as a wake-up call before our next match against Singapore.

“We must clear that hurdle before talking about the semi-finals.”

At the Thien Truong Stadium in Nam Dinh on Wednesday, Malaysia’s goals were scored by striker Luqman Hakim Shamsuddin in the 36th and 67th minutes, and Syahir Bashah in the 41st.

Laos’ consolation the 84th minute came via Visith Bounpaserth, but Malaysia were the better side throughout with more possession.

Maloney, however, believes his boys will continue to improve if they are tactically disciplined and keep up the winning momentum.

“The first game against Thailand was very physical, but we still managed to get a result. The Laos game was also quite demanding and we got the three points also. The further we progress, the better we’ll get.”

Malaysia are top of Group B with six points.

Meanwhile, Singapore beat Cambodia 1-0 in the other Group B match with Saifullah Akbar scoring the winner in the 36th minute.

The Lion City are second with four points, and must beat Malaysia to stand a chance of reaching the semi-finals.

Coach Nazri Nasir said his players will treat the Malaysia game like a final.

“We must focus on getting a win over Malaysia, and the players are motivated to get the desired result,” he said. 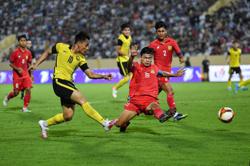