PARIS (Reuters) -Second-placed RC Lens lost ground with Ligue 1 leaders Paris St Germain when they slumped to a 1-0 defeat at Montpellier on Sunday.

English forward Stephy Mavididi found the back of the net for the hosts early in the second half to lift his team up to 13th on 13 points from 10 games.

Lens have 18 points and trail PSG by nine points. But they are now in danger of being overtaken by Olympique de Marseille, who moved within one point after Matteo Guendouzi's double inspired them to a 4-1 comeback win against Lorient.

Third-placed Marseille have a game in hand to play against Nice, who are fourth on 16 points after losing 1-0 at Troyes.

At the Stade Velodrome, Guendouzi added to goals by Boubacar Kamara and Arkadiusz Milik after an early penalty by Armand Lauriente had put visiting Lorient ahead.

But Marseille's pressure was too intense for Lorient with Guendouzi, who now has scored three goals and set up two in nine appearances this season, playing chief tormentor.

At La Mosson, Montpellier started well and came close to opening the scoring in the eighth minute when Valere Germain's strike crashed onto Jean-Louis Leca's post.

In a lively first act, Lens had their best chance in the 28th minute through Jonathan Clauss but the wingback's free kick was superbly saved by Jonas Omlin.

Montpellier were rewarded for their domination three minutes into the second half when Mavididi beat Leca with a low shot after being played through by Teji Savanier.

The visitors piled on the pressure but could not play their usual eye-pleasing quick passing game and failed to really threaten.

Montpellier were close to doubling the advantage but Leca parried another Germain attempt in the 64th.

Lens, however, got some hope when Jordan Ferri was sent off in the 86th minute for picking up a second yellow card for pulling Seko Fofana's shirt but their efforts were in vain.

"We didn't manage to implement what we had done well during the week," said Lens coach Franck Haise. "We didn't make the right choices either. If we don't do things 100%, we're going to struggle. It's rarely enough to play 45 minutes to win a game. We saw that against Montpellier." 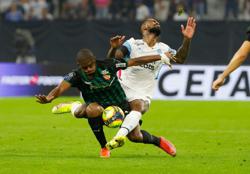