LONDON (Reuters) - Premier League leaders Chelsea will be without injured Antonio Rudiger for their West London clash at Brentford on Saturday but Romelu Lukaku is fit and will play, manager Thomas Tuchel said on Friday.

Centre back Rudiger was absent from Germany's World Cup qualifier against North Macedonia on Monday due to a back problem.

"Toni Rudiger is injured," Tuchel told reporters. "He came back injured from his national team so is also not available. Christian Pulisic is still injured and not available.

"We have doubts with Hakim Ziyech. He missed the last two trainings with a headache and it seems that he’s not with us for tomorrow.

"Romelu is fine, doing all the training sessions and he will play tomorrow."

Tuchel said central defender Thiago Silva would also miss the game, the Brazil captain not due back from international duty in South America until later on Friday.

"We had our talk today about Brentford, we had our tactical training today and he missed all that. He played 90 minutes, he has 12 hours of travelling so that maybe gives the answer about his availability," said the German.

Tuchel said he was not happy with the situation but it was no surprise.

"Are we happy about it, all the coaches, with the amount of games our players play for their countries? No, we are not. Does anybody ask us? No, also not," he said.

"And does it change anything? Also not. I don’t get down because of this, I knew it before."

The manager expected promoted Brentford to be tough opponents as they enjoy a strong start to life in the top flight.

"They will not gift us a single inch on the field and we have to be ready mentally, physically and tactically," he added. 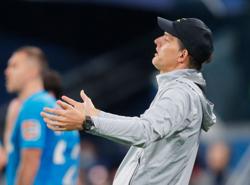