Soccer-Juventus' Dybala and Morata ruled out of Chelsea clash – Allegri

(Reuters) - Paulo Dybala and Alvaro Morata will miss Juventus’ next two games, against Chelsea and Torino, after picking up injuries in a Serie A win over Sampdoria, coach Massimiliano Allegri said on Sunday.

Dybala scored Juve’s opening goal in a 3-2 victory in Turin but left the pitch in tears with a muscular problem 10 minutes later, while Morata came off in the second half.

It is a heavy blow for Allegri ahead of a big week in which European champions Chelsea visit on Wednesday in the Champions League, before Saturday’s Turin derby.

"They will certainly not be available against Chelsea or Torino," Allegri told Sky Italia.

"Then there is the international break. We hope to have them back after that, but this is part of the game.

"Now it happens to us, later it could happen to someone else. We will need to be good to make up for the absences."

Allegri, who was taking charge of his 400th game as a Serie A coach, oversaw a second consecutive victory for his side after they failed to win any of their opening four league matches.

However, they conceded twice in their 20th consecutive league game without a clean sheet, a run going back to March 2.

"Today we did well in the defensive phase, but we made a mistake for the corner on their first goal and for their second, we lost the ball while playing out from the back and got caught out. It can happen," Allegri said.

"We needed to score goals and kill the game off sooner. But we are happy because we got our first home win, the second in a row, and now we can calmly prepare for the match against Chelsea." 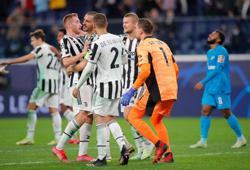