Soccer-Jimenez back on scoresheet as Wolves beat Southampton 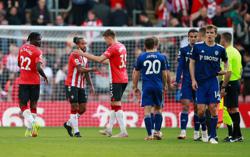 The Mexican's solo effort in the second half was his first league goal since last October. The 30-year-old suffered a fractured skull the following month, prematurely ending his season and eventually requiring surgery.

After a slow opening period, Jimenez broke the deadlock in the 61st minute, shrugging off Jan Bednarek's challenge to latch on to a long ball from goalkeeper Jose Sa before wrong-footing centre back Mohammed Salisu to fire home.

"I want to score every game, I knew the goal was coming, I was fighting for it, working for it and the team deserves it," Jimenez told Sky Sports.

"I was thinking 'When will the goal come?'. It felt really good. Four of our five games have been incredible, we need to keep going like this. We did a really good job."

Bruno Lage had dropped wingers Adama Traore and Francisco Trincao from the Wolves starting lineup for Daniel Podence and Hwang Hee-chan, but the changes did little to inspire the team in attack.

The visitors had only one shot on target in the first half, which came in the first minute, while at the other end Southampton's Nathan Redmond hit the back of the net only for his strike to be chalked off for offside.

Tino Livramento and Adam Armstrong were the bright sparks for the home side and the second half became an end-to-end affair as the Saints mounted numerous attacks.

But Wolves held on, with Jimenez nearly scoring a second in injury time from a similar long ball. But his hesitation while deciding to shoot or square the ball to substitute Traore cost him as his tame effort was parried away by Saints keeper Alex McCarthy.

Wolves moved provisionally up to 13th with their second win of the season while Ralph Hasenhuettl's Saints are 16th, one point above the relegation zone.