Soccer-PSG's Mbappe expected to be fit for Clermont, Messi and Neymar out

PARIS (Reuters) - Lionel Messi and Neymar will miss Paris St Germain's Ligue 1 game against Clermont on Saturday having just returned from international duty but Kylian Mbappe is expected to be in their squad after recovering from a calf injury.

Mbappe picked up the injury during France's 1-1 World Cup qualifying draw against Bosnia last week and missed Les Bleus's two other games against Ukraine and Finland.

PSG coach Mauricio Pochettino, however, was confident he would play at the Parc des Princes for the first time since the transfer window closed amid media reports he was willing to join Real Madrid.

"Kylian is happy, he is emotionally stable and before the end of the transfer window he stayed in a positive mindset," Pochettino told a news conference.

"He wants to play football and enjoy himself. He has been training and recovering well so we hope he will be involved with the squad."

PSG, who have a maximum 12 points after four games, also welcome back defender Presnel Kimpembe and striker Mauro Icardi after both shook off injuries.

Icardi's availability is all the more important with Messi and Neymar out after playing World Cup qualifiers with Argentina and Brazil overnight.

"Those players played in the early morning so Leandro Paredes, Lionel Messi and Neymar are not going to be involved with the squad tomorrow, it's common sense," said Pochettino.

Messi, who netted a hat-trick in Argentina's 3-0 victory against Bolivia, has only played half an hour with PSG this season after joining as a free agent on a two-year deal from Barcelona.

Pochettino added that he had not yet decided who would start as goalkeeper with Keylor Navas having played every match so far at the expense of the newly-recruited Gianluigi Donnarumma, who led Italy to the European title in July. 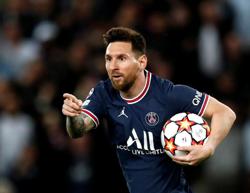