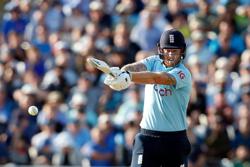 LONDON (Reuters) - London's Metropolitan Police said they made 18 arrests in the city centre and around Wembley Stadium on Friday as England faced Scotland in the European Championships.

Thousands of Scotland fans travelled south to London despite torrential rain in the English capital, many without a ticket for the match.

While the majority of supporters behaved themselves, with no trouble taking place inside the stadium, there were isolated incidents across the city, according to the police.

"As of 22:30hrs 18 people had been arrested as part of our policing operation during the England v Scotland game," the Metropolitan Police wrote on Twitter.

"The majority of these were in central London and in the vicinity of Wembley Stadium. Officers continue to engage with crowds."

The Metropolitan Police had issued a dispersal order for central London ahead of the Euro 2020 game, which ended 0-0.

The measures were put in place to "prevent the public being caused alarm, harassment and distress" and stop criminality, after large numbers of fans travelled to the capital despite London mayor Sadiq Khan and other politicians urging non-ticket-holding supporters not to.

Dispersal orders give the police extra powers to break up groups of two or more people, where they believe their behaviour is causing a nuisance, harassment or distress.