CUIABA, Brazil (Reuters) -A goal on his full debut from English-born striker Ben Brereton gave Chile a 1-0 win over Bolivia in their Copa America clash on Friday.

The Blackburn Rovers player made his debut for the country of his mother's birth at the end of Monday’s 1-1 draw with Argentina, and he made an immediate impact on his first start in Cuiaba.

The big striker gave Chile the perfect start after 10 minutes when he got on the end of a counter attack and coolly slotted the ball home from 15 meters out.

Brereton also forced Bolivian goalkeeper Carlos Lampe into at least two other good saves in the first half alone and was a handful for the Bolivian defence before being substituted in the 83rd minute.

Bolivia lost their opener 3-1 to Paraguay on Monday and they were without five players who tested positive for COVID-19, including top goalscorer Marcelo Martins.

Friday night's task proved too much for the depleted side against a rival team that won this tournament twice in a row in 2015 and 2016.

Even against a team missing injured striker Alexis Sanchez they could only muster three shots on target compared to Chile’s 11.

Eduardo Vargas had the ball in the net in injury time for Chile but the second goal was ruled off due to offside.

The result takes Chile to the top of Group A with four points, one point ahead of Paraguay. Argentina, who play Uruguay later on Friday in the Uruguayans opener, have one point. 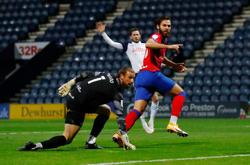